The first time I heard the phrase “retail politics” was when then-Sen. Joe Biden was about to persuade my mother to vote for Sen. John Kerry. Biden had trusted me with his BlackBerry so I could get her on the line. She was at an assisted living facility in Delaware, where I’m from, and my wife and I were at a special event featuring Delaware’s senior Senator in Huntington.

A couple of things went awry with Biden’s ambitious plan. I almost dropped his BlackBerry trying to figure out how to use it. What was worse: I forgot my mom’s number. But I reached her and told her that Joe Biden wanted to talk to her about the election. That’s when Biden turned to my former boss and said with a gleeful grin, “Now for some retail politics!” 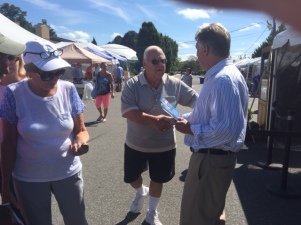 Now that I’ve been on the “retail” trail in my own campaign, meeting thousands of Long Islanders, I appreciate his enthusiasm because you need that gumption to keep on going door to door. If you don’t like reaching out to people, you shouldn’t be in politics. You have to find a way to connect with total strangers time and time again. Tonight, as I write this, across the country hundreds of thousands of people are engaging in some serious retail politics. The fate of the country is literally on the line.

Here in the 12th Assembly District, the national tension has filtered down to the street level from Eaton’s Neck to Deer Park. Seeing all the houses with their Halloween decorations still up only makes it more surreal. All those lawns scattered with the remains of zombies and skeletons struggling to emerge and walk among us! God, I hope they don’t vote!

One recent afternoon, I approached a lady walking her dog so I could give her my palm card and without prompting she volunteered: “I’m so sick of this election! I can’t wait for it to be over!”

I wanted to say, hey, how do you think I feel? I’m out here sticking my neck out! But I restrained myself. It really puts you through your paces when a guy glares at you, “Are you with Hillary’s people?” As if his eyeballs had death rays about to shoot out.

I’ve learned when to respond and engage in a dialogue, and when to smile and move on. I just want a chance to ma

ke progress in Albany, but I know I’m part of something much bigger. People want their government to change. My goal is to make sure it’s for the better. At least that’s how I see it, given my pedigree as a journalist turned politician. My objectivity has guided me to see things not only as they truly are, but as they really should be. When I get the facts, I change my mind. The other day, though, a friend sent me a photograph taken at a Trump rally of a man wearing a T-shirt that said: “Rope. Tree. Journalist. Some assembly required.” Gotta love that First Amendment! But I digress.

I’m just happy that I’ve come as far as I have. Certainly I’ve defied the professionals’ predictions, and I wouldn’t have gotten off the ground without the support of my friends and family who helped me walk that extra mile. And shake one more pair of hands. I’ve met great people (and eaten great food) at the Greek Festival at St. Paraskevi Church in Greenlawn. I was honored to be at the American Legion Hall and the VFW posts, at the NAACP’s sponsored evening at the South Huntington Library and the League of Women Voters’ forum at Harborfields Library. I spent an enjoyable evening at the Huntington Yacht Club—and I didn’t even have to join!

Who knows what tomorrow night’s returns will bring? Certainly, being a challenger is challenging. My opponent has so much money to stay in power. He’s already been an Assemblyman 14 years and he didn’t even face a Democratic Party challenger in 2012 and 2014, which made him sort of like the Communist Party’s people’s choice!

Democrats. He gets free mailing privileges too, and I’ve been inundated with revealing material about him. I’ve learned that he appreciates women and their contributions to Long Island. Who’d argue with that? Today I learned that the incumbent is working every day to give our kids the best opportunities for a brighter future. Every day? Yikes, I hope he paces himself because that’s a daunting task, no matter what he actually does.

That slick educational mailing came into my home thanks to the Long Island Law Enforcement Foundation, which didn’t explain what it was but it did provide a disclaimer that “this communication was not expressly authorized or requested by any candidate or by any candidate’s political committees or any of its agents.” I suppose that fine print is all that’s required.

Speaking of print, I want to give thanks to all the reporters, editors and publishers I met along my way. Let’s hear it for the Fourth Estate! It’s been very amusing to be the subject of a story for a change. And I have to admit I get a big kick out of seeing my bylines all over town on my ubiquitous lawn signs. I love that more I thought. Ahem.

And I’m eternally grateful to the Northport Observer for endorsing me. I understand why it was a “touch choice” as the editorial put it:

“The Republican incumbent Andrew Raia is a likable person who has amassed great
seniority in Albany, but unfortunately because he is in the Republican minority in a chamber dominated by Democrats, he can’t get anything done. He can’t even get the most basic of legislation to reach a committee for consideration—a sad but true problem in the process of government in Albany.

“Voters should consider sending someone to Albany who will be able to introduce a bill, who will have a voice and be part of the dialogue. Mr. Raia is being challenged this year by Spencer Rumsey, of Northport, a career journalist. Mr. Rumsey, a decisive underdog who has had trouble even getting his own party engaged in the campaign, is hardworking, knowledgeable, a quick study and independent.

“The Observer has no knock on Mr. Raia, but we endorse Mr. Rumsey in this race because it is about time to have affirmative representation in Albany.”

I couldn’t have said it better myself!